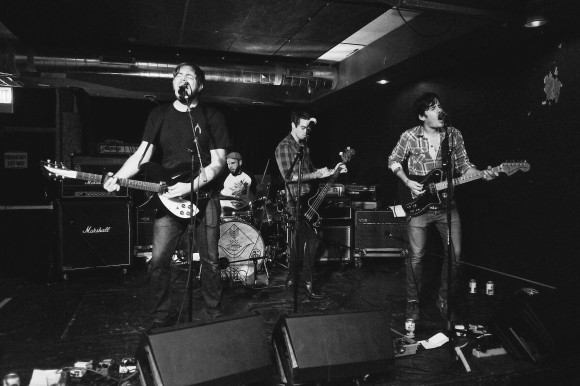 Our past couple of shows have been with some of our favorite bands and people. A few weeks ago we played with friends Cheap Girls and Beach Slang at Township. Then just this past Saturday we played with our best pals Water Liars at Schuba’s. I don’t know why we’ve been given the fortune of playing with so many great bands, but I definitely do appreciate it.

Our luck keeps going for at least one more show on Friday, November 5, with Restorations (Stream their new record on NPR here), The Smith Street Band and The Sky We Scrape. After that we’re going to work on a new 7″ and LP, and play more shows if ones like these come up.

We have a new guitar player. His name is Ryan Ford. He’s a sweetheart. He’s also a very good illustrator. Take a peak at his work.

Ryan helped me design the new logo for Sleep Recordings. Sleep is the label I started in 2002 to release The Gunshy’s first album, To Remember/To Forget. I put out a few other things after that, including Andrew Bryant’s first album. Andrew started Water Liars with our friend Justin a few years back and has been keeping busy with that. I resurrected the Sleep Recordings label for the release of Silent Songs. When Andrew told me he had a new solo record, it made all kinds of sense to help him release it. His new album is called This is the Life. It comes out January 27 on LP and digital (maybe some CDs too). You can hear the first single, “Losing My Shit”, here. If you’d like to keep up on other releases I’ll be putting out with Sleep, you can join the email list on the Sleep site.